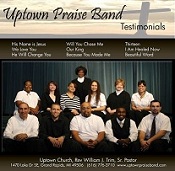 Uptown Praise Band is #1 on Reverbnation’s Christian/Gospel local charts and is hovering at the #350 spot on their National Christian/Gospel charts. In August 2010, the band was selected to play A-stage at 2010 Unity Music Festival in Muskegon (that drew over 50,000!) and in October 2010 was chosen as a top ten finalist in Best Of The Blessed competition, broadcast live on TBN TV during the 2010 Christian Music Awards hosted at Trinity Music City in Nashville, TN. In June 2011 the band was selected to play main worship stage at Big Ticket Festival in Ionia, MI along with other top Christian artists such as Toby Mac, Newsboys, Skillet, Natalie Grant and many others.

Because You Made Me a radio ready Christian rock ballad released by its own independent label SpiritFilled Productions. The song is an uplifting ballad about hope and faith with crystal clear vocals, beautiful soaring harmonies, great relatable lyrics and strong musical dynamics. The song is part the bands debut "Testimonials" album released in August 2010 available on iTunes.com, CDbaby.com and Amazon.com. The album is also available at over 350 christian music/book stores across the US via the myMEDIA BurnBar platform. The album is a mix of lite rock, smooth jazz and up-beat rock funk.

We are looking to book over 50 bands! Check it out http://www.spiritfilledproductions.com/michiganstage.html

Come out and support us we we play in downtown Grand Rapids, Alder Plaza at he Soul of the City celebration. We play at 2PM the event is sponsored by Meijer and the City of Gran Rapids hosted by The Urban Sparks.

Vote for UPB in Gospel Showcase at http://www.facebook.com/urbansparks

For more info on the even http://www.uptownpraiseband.com/showcase.html

Chris and the crew from Grand Rapids, MI

Raylene Waye said…
hey!! congrats on getting to play at the Mall and for the Gospel Showcase!!! Keep up the great work and keep shining your light!! :)

Uptown Praise Band said…
Looks like we got selected to play Mall of America. Now we need prayer that I can get the whole band there and back in time for church on SUNDAY! Its a NINE hour drive for us. Thanks Christopher!!! Look out world, here comes IMC!!! :)
Chris and the crew from UPB

Raylene Waye said…
all the best with playing for the Festival!! cheers :)

Thanks for the request, we all need each other!

Yea, I am also the bands manager/booking agent so we should be able to arrange something. Let me know. -Tom

Hey thanks for the request. Congrats on the successes! We will have to get together for a concert some time. www.peakbandmusic.com

Ben Sheppard said…
Thanks for the friend request!  God Bless!