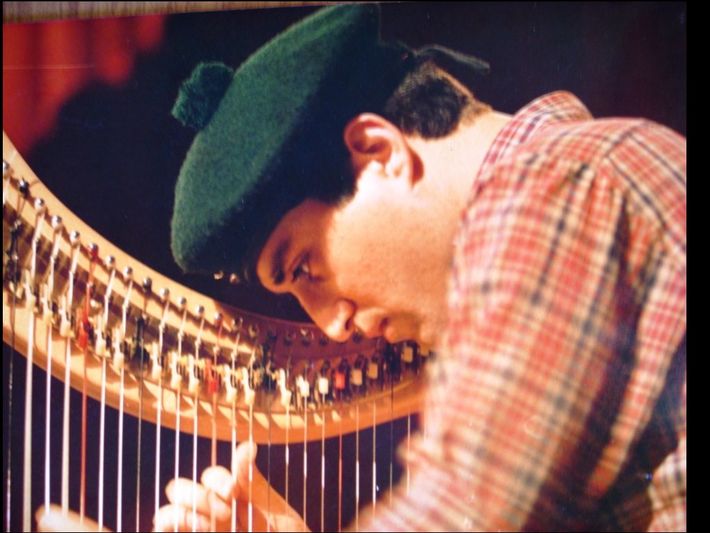 Bio:
Born in Buenos Aires, Argentina, I took knowledge of the Celtic world at the age of twenty motivated by my love of literary and musical subjects. Thanks to Janet & Robin Williamson (www.pigswhiskermusic.co.uk), and Irish harp champion Sylvia Woods (www.harpcenter.com), I began to incorporate, the melodies and knowledge of traditional techniques and instruments, focusing on the implementation of whistle and Gaelic harp. Passion that lead me by 1985 to organize a Celtic Festival in Buenos Aires (historically the first took place in l960), as well as other cultural and musical activities within the Irish community living in Argentina, thereby developing an attitude because of the disregard on certain community sectors for their Celtic roots. At the beginning of'90 and after several performances and a tour in Patagonia, for welsh communities settled in our country, 'Poitín' dissolves, leaving a testimony tape released independently in 1988, memorable for being the first of its kind in Argentina. In the month of May 2003, the prestigious Galician folk group "Luar na Lubre" add music to one of my poems. This collaboration is crystallized in April 2004 with the inclusion of this piece on two tracks from the album "Hai un Paraiso" published under the label Warner Music Spain. Alongside Bran, I did participated as guest musician of their South American tour, performing at the Opera Theatre in Buenos Aires on 12-7-04. In 2008 – I created a blogsite of my own named "Celtic Sprite - My musical perspective on celtic roots and other works”. Music, culture and literature take place along with the collaboration of musicians and journalists from other countries. 2010 – On January I created the Facebook Page “Amigos Celtas” A site intended to spread celtic culture and activities in Spanish, along with local and foreign co-equipers

My Activities and Works

1985 - Co-founder of the Irish musical folk band "Gael Ceolta"
1985 - Collaborated with reviews on Celtic music in the local Irish newspaper "The Southern Cross"
1985 - Organized a “Celtic Festival" at the Fahy Club in Buenos Aires (the second historically, the first held in 1960 at Luna Park in Buenos Aires)
1986 - Co-founder of the Celtic Association of Galician Pipers and their folk band “Poitín"
1988 - The work "Correspondence between the Asturian and Galician legends" is published in Asturias, Spain,  with the assistance of the Ministry of Education, Culture and Sports of the Principality, and the Asturian Celtic  League.

1988 - Took part of the album "Poitín" being the first analog recording in Argentina with Celtic harp and composed original melodies on traditional styles.
1988/9 - Toured with Poitín.
1991/2 - Co-founded the folk band “Lenda Gwyn”

1997 - Co-founded the group "Bran", a musical project through which I recaptured the spirit of Celtic traditional tunes with original arrangements inspired by the feelings and appreciation of its members.
1998 - Launched Bran´s album "Awen", the first digital recording in Argentina w/Celtic harp and original melodies on traditional styles
1998/9 - Presentation tour of the album, broadcast in Spain and USA
2001 - Inclusion of two pieces on the CD Sampler of the journal Celtica in both editions (Italian and Spanish)
2002 - Participated  with Bran at "The 5th Celtic Meeting" in Santiago de Chile, Republic of Chile.
2003 - Participated with Bran at the "First International Celtic Festival”  in Montevideo, Uruguay

2004- Performed as  soloist in the "Temperley Celtic Festival" (http://www.temperleyweb.com.ar/celta/index.html)
2004 – Collaborated w/Bran on  a show called "Celtic Sound” music and celtic legends, along with the narrator Oscar Orquera and development of Susana Shanahan

2006/2007 - Along with Gabriel Bollani, developmed and edited the "Celtic New Project" Songs of love and hope, instrumentals, treated with virtual acoustic sounds.
2008 – On September of this year I created the blog "Celtic Sprite" A musical perspective on celtic roots and other works.(http:/branawen.blogspot.com)

2010 –  On January I created the Facebook Page “Amigos Celtas”  A site intended to spread celtic culture and activities in Spanish, along with local and foreign co-equipers

I will def. hook up with you!

Marney Hardin said…
Hiya! Thanks for friending me here, too! Best, Marney

Anne Roos said…
Thank you again for inviting me to this site! Cheers to you, my friend!

Last Summer said…
Thank you.  And yes I do agree!  I've found better music on this site here than anywhere else!!!  I'll be sending people this way ;)