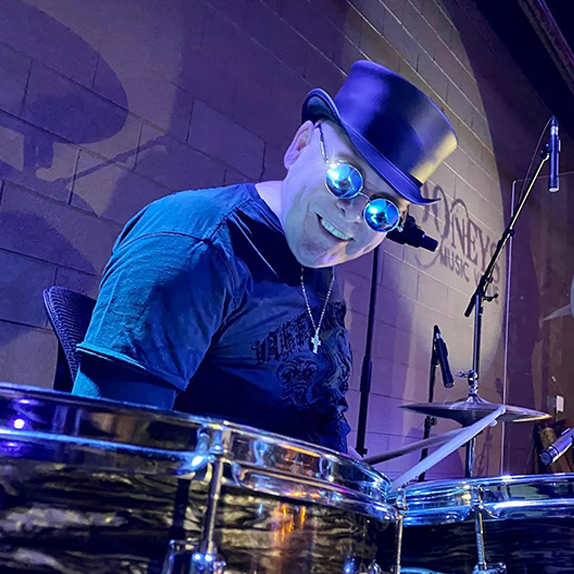 Music Genre(s):
Funk/Soul/R&B/Blues (Old School, as it is termed!)

Bio:
Stevie Hawkins is a multiple award-winning artist who has ascended through the ranks as an adept drummer, vocalist, entertainer, songwriter, film music composer, teacher, audio engineer and producer.

He is known for his chameleon-like adaptability to envision and perform avant-garde conceptions across multiple genres of music.

Since 1972 to the present day, artists Stevie has performed on drums and vocals with have been:

Stevie continues his life-long pursuit of musical and artistic excellence, demonstrating a tireless commitment to his craft.

2011/12, recorded and released the album, "What The Funk?" The album containing 20 tracks spans the world of Funk, Soul and R&B music from the late 1960's to the present. The album featuries some of the best in their genres: Soul Diva Jocelyn Brown, Sista Monica Parker, Tony Lindsay, Keith Harris, D'Layna, Funk Dogg, Cooley, Jaroslav Jakubovic, The Blues Brothers Horns, The Memphis Horns, Joe Vitale, Thiago Pinheiro, Butch Taylor, Tyrone Chase, Anthony Vitti, Sal Giorgiani, Jennifer Cosaro, Ralph Rosen, Delicious Allstars, Sanj Sen and Chuck Webb, the album's style is a mix of several genres, such as Soul, Blues, Jazz, Latin and the many other influences that make Funk music what it is.

Released as a single in 2014, Stevie covered the Hoagy Carmichael and Stuart Gorrell classic, "Georgia On My My Mind".

About the What The Funk? CD Release:

Although titled What The Funk?, the album is not entirely comprised of funk tunes. Says Stevie, "The album is a mix of funk, soul, jazz, latin, blues, with rock overtones blended throughout the tracks. Although this is me doin' my thing, me being me, the album pays homage to some of my inspirations and influences as a vocalist and drummer such as Clyde Stubblefield, Tower of Power, Bootsy Collins and P-Funk, Al Green, Bobby Bland, George Clinton, Funkadelic, Sly & The Family Stone, James Brown, Toots Thielemans, Cold Blood, George Duke, Marvin Gaye, Junior Walker, Jimi Hendrix and others. There is a little something here for everyone. You get the funk, and then some!"

With soulful vocals, deep drivin' bass, slick guitars, a big~n~tight in your face horn section, smooth Fender Rhodes, super-funky drums, Hammond B-3 organ and clavinet, the heavy guns on this new album fire with all barrels.

2014, Stevie recorded and released a single, covering the Hoagy Carmicheal/Stuart Gorrell classic, Georgia On My Mind.

2015, a two single is released, a soulful R&B tune "Diamonds In The Sky", and a big band blues song "Sweet Honey".

I’m quite honored and excited to be nominated in the 2016 Indie Music Channel Awards. Thirteen nominations in five categories is a definite "WOW" factor, and believe me, most unexpected. This is also a significant achievement for co-writers Charlotte Hannon and Tim Crouch, artist John Breen, and band members Miles Grayson and Victor Orlando, by receiving nominations in their own right. The nominations are also a commendation to…

wow what a great list of people behind you - so great ! Hope to meet again next year:)

Thank you! Congratulations to you too!! So excited about the awards show!

Thanks! And congrats to you too! :)

Thanks for your friendship!  Congratulations to you on your nomination as well!  I am

planning to attend the ceremony on the 29th and I am looking forward to meeting lots of new people!

MELIA said…
Keep pumping out those jams!!!! Thanks for the friendship and looking forward to seeing you in LA! xoxoxo. Melia