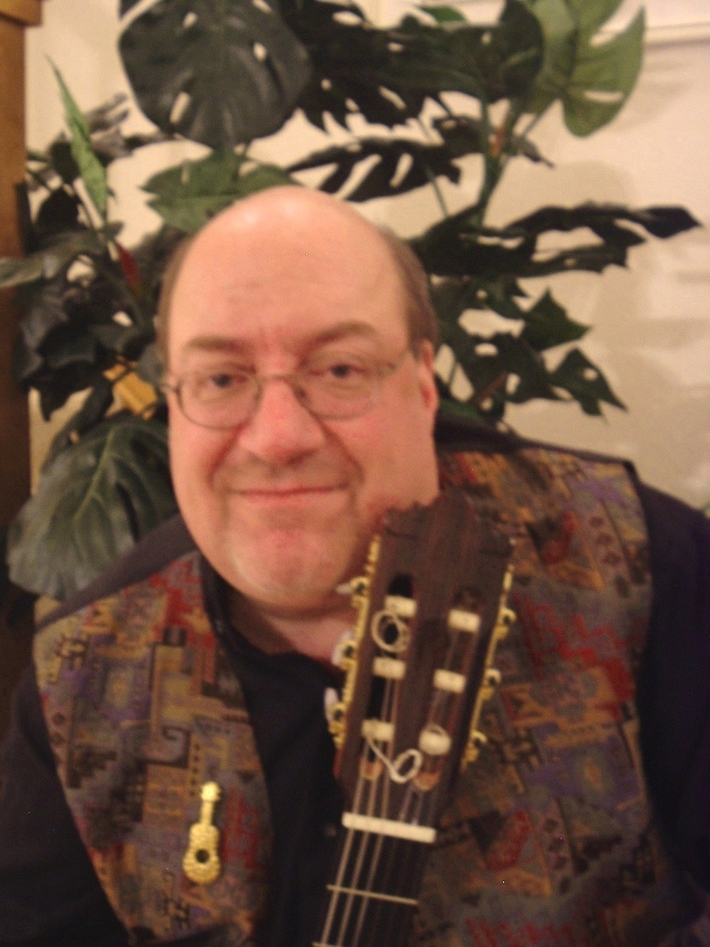 Bio:
ERIC ROBERTS is an accomplished guitarist and bassist as well as composer, and has been playing professionally since the age of 16. He holds a B.A. in Music from Ithaca College and a Master’s in Music from the University of Miami. He has enjoyed a successful career playing in Broadway shows, backing up name entertainers, performing solo guitar concerts, giving music workshops, and providing music for every type of occasion. His repertoire ranges from classical to jazz, smooth jazz to brazilian, and nuevo flamenco to new age. He works as a solo performer with tracks, as a guitar duo and with a quartet.

His debut CD, “IN A SILENT PLACE”, featuring world renowned cellist, David Darling, has been receiving accolades the world over. The track “Flowing” became a finalist in the “new age” category of the 2009 Independent Music Awards, and the track “Cella’s Song”, written for his wife, won the "Outstanding Achievement in Songwriting Award" in the "instrumental" category of the 2008 Great American Song Contest. It also won first place in the “instrumental” category of the 2007 USA Songwriting Competition. His music can currently be heard on XM and Sirius Radio as well as Comcast’s “Music Choice” channel on their “Soundscapes” program.

His new EP, “MY BRAZILIAN HEART”, features many of his smooth jazz and brazilian compositions, including “Children’s Song”, which won first place in the “instrumental” category of the 2010 Great American Song Contest.

In addition, his music has been licensed via Pump Audio to HBO, A&E, and other cable channels.

He was just nominated "Best Male Jazz Artist" at the 2012 Indie Music Channel Awards held at the legendary "House of Blues" in L.A.

In A Silent Place

This is a superb album of acoustic guitar (both solo and with ensemble) instrumentals, highlighted by Eric Roberts' expressive, warm, and evocative playing (he also composed all the pieces). Cellist David Darling, who as a session player/accompanist may be one of the most sought after artists around today, plays on four tracks, and the other guest artists are Ed Contreras on percussion and Robert Weinstein on guitar. Besides guitar, Roberts also contributes on bass, percussion, and guitar synthesizer (the latter used mostly as background textures or strings). Many of the pieces are moody and reflective, even when they are somewhat uptempo (such as "New Love" which despite its jaunty pace still carries an air of delicate sensitivity) and some are downright minimal tone poems, such as the three-part "Reflections" (numbered "I," "II" and "III"). All three are solo guitar tracks. "II" is even somewhat abstract, yet not unpleasantly so. "III" introduces trace subtle elements of flamenco, but in the context of the piece, this connection could be missed as well.

One of the best tracks, indeed one of the better songs I've heard this year (although the release is technically a 2001) is "The River Runs," featuring Roberts, Darling, and Contreras. Mixing an uptempo pace with darker tonalities yields a composition strongly reminiscent of the best acoustic work on the ECM label as well as the early days of Windham Hill groups like Shadowfax and Nightnoise, although without the latter's overt Celtic influences. "Flowing" is another winner, more subdued than "The River Runs" yet equally memorable and even more evocative. Darling contributes on midi-percussion, rainstick, and "cello orchestra" while Roberts handles his full assortment of instruments. His synth work here, more overt than elsewhere on the album, is a highlight, introducing ethereal tones that weave a soft strain of melodicism throughout the slow tempo rhythm and background guitar and bass, while Darling's accompaniment is spot on. There is a lazy sunny day feeling to the piece, as it brings to mind images of biking along a forest road under a canopy of tall pines, with rays of sunlight poking through now and then.

Some songs carry more than a hint of jazz, again in the ECM vein more than anything else, such as ""Journey Through Time" or the late night ballad "Remembering You" which would fit in either a cabin by a northern lake during a fog-shrouded early morning or playing softly in a 20th floor apartment high above a cityscape aglow with the evening's lights. A different mood is achieved on "Cella's Song," a soft and gentle acoustic guitar number (with some subtle synth textures) that easily stands toe to toe with anything from the best known guitarists in new age or adult contemporary music today.

Albums as solid and thoroughly enjoyable as In a Silent Place don't come around often, so when they do, I try my damndest to send up as many flares as possible. Consider the beacons lit, friends. If you fancy yourself a fan of acoustic guitar or acoustic ensemble music (with a little synth work here and there, but nothing obtrusive or misplaced), this album deserves your attention and you won't be sorry if you pick it up. How this one slipped by everyone from as far back as 2001 is a mystery, but now that we are alerted to its presence, there's no excuse for ignoring it. Easily, this one of the best albums I expect to hear in 2005.

Heading in a different direction than the introspective and more tone-poem approach that he displayed on 2001's In a Silent Place, acoustic guitarist Eric Roberts sets sail for the soft ocean breezes and sun-soaked beaches of Brazil (as interpreted through the moods and motifs of accessible smooth jazz) on My Brazilian Heart. The six-song EP does indeed contain some Spanish musical influences, notably the sensual Latin rhythms of “Flying Free” and the sexy Spanish flavors of “Swiss Samba,” but the majority of this CD is resplendent with the best elements of smooth jazz with literally none of the vapidity or shallowness that sometimes creeps into the genre. Putting it succinctly, this is a killer EP of both mellow and cookin’ jazz licks played by Roberts and his guest artists.

Those guests are well-known ambient artist Paul Avgerinos, here contributing on funky soulful bass, Nick Bariluk on keyboards, noted woodwind player Bill Harris and drummer/percussionist Barbara Merjan. Everyone involved plays with finesse, style, and gusto (when it’s called for). It’s hard to believe these cats haven’t been jamming for a long time, to be honest, as their musical chemistry and sense of simpatico is self-evident from the first listen.

One of the comparisons I kept coming up with as I listened to this excellent CD was to Chick Corea’s early incarnation of Return to Forever, circa Light as a Feather, because both recordings share a joyous exuberance mated to a refined musicianship and a carefree playfulness as well. My Brazilian Heart is a hugely entertaining recording and I never tired of it over many playings before writing this review.

“Brazilian Morning” starts things off in a spirited manner with a nice piano intro spiraling into Roberts’ guitar side-by-side with Harris’ flute. Lively but not overly so, the song sounds like a picture-perfect sunrise! “Gentle Breezes” captures the titular reference with a midtempo rhythm and perfect amalgam of assorted musical elements—Avgerinos’ bass, Merjan’s trap kit drums, Bariluk’s keyboards and Roberts’ guitar. “Flying Free” sizzles with tropical heat tempered by jazzy undertones and the resultant blend produces just enough fire to get your fingers snapping and toes tapping but is counterbalanced with a giddy effervescence to lighten the mood. “Brazilian Nights” is, paradoxically, the most “American,” i.e. urban, cut on the EP, with sexy sax and vibrant piano supported by the solid rhythm section as well as adroit soloing by Roberts.

I’ve often written of my belief in the adage “quality over quantity” in reference to EPs, and Eric Roberts’ My Brazilian Heart is another example of the veracity of the phrase. I certainly wouldn’t have minded more of the same on this recording, but if these six dynamite tracks are what the musicians settled on as being their best efforts, well, that’s more than good enough for me. If all smooth jazz recordings were this good, the genre would never have gone out of fashion. Who knows, maybe Roberts and company can even breathe new life into it? Highly recommended!

Love "Flowing" in 5/4! I love odd meters, especially when they are handled smoothly like this. More please!

This music is brilliant, Eric. Love it! I need to get your CD. The quality is absolutely GREAT!

Nice dedication to notes and tone. Teresa De Dominicis said…
I like your Swiss Samba and Brazilian Nights! It relaxes you besides making you feel good listening to it; even though I like Tango since I am from Argentina, I love your music.

Maddie Razz said…
Thank you so much! :)