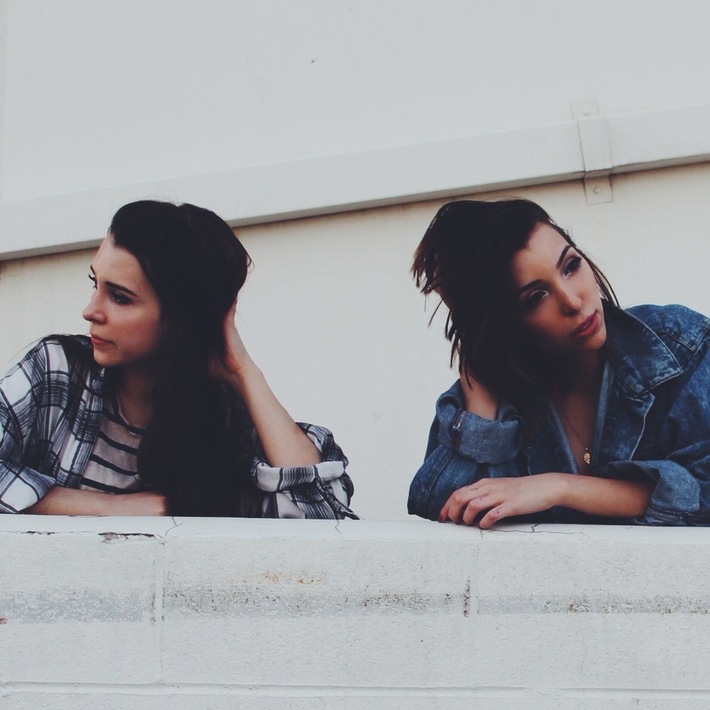 Grunge-infused electro-pop/rock act Pixikill is primed and ready for its close-up. The team, comprised of sisters Jewel & Blaire Restaneo, Teen Vogue assures that the duo is “poised to hit it big.” J14 mag issued a “Hot Band Alert.” And Blurt magazine deemed them the “Jailbait Pick Of The Week.”

The wink-infused, sunny-side-up pop outfit was launched in 2011 by the Pennsylvania-born, New York-raised siblings, who share lead vocals and commandeer guitars & synthesizers. They are currently residing in Los Angeles.

Blaire surmises, “We’re sisters who write, sing and play electro pop alternative music, create and direct our own music videos, play on stage like there’s no tomorrow… and hunt pixies.” Music aside, the pair has also been known for their highlighter-hued-hair and novel sense of style and fashion.

Musically, while their sonic signature leans pop, Pixikill is hardly akin to Britney and Katy Perry. Jewel told J-14, “We call it electro pop grunge: angsty lyrics, a good blend of addictive synths with electric and acoustic guitars, driving beats and huge drums. It’s fun, yet it has dark elements.”

Included on its self-penned five-track debut EP “The Luring”—executive produced by multi-platinum songwriter/producer PJ Bianco (Jonas Brothers, Metro Station)—is fiery first single “Chameleon,” whose music video Blaire and Jewel produced, directed and edited. It has garnered nearly 34,000 YouTube views. That song addresses the universal challenge of discovering where you fit in. Jewel notes, “It’s about conformity. It’s sort of a sarcastic kiss off to someone who just kind of adapts to whoever they're surrounded by.”

Pixikill followed that successful first outing with two new releases from “The Luring,” all with accompanying music videos: “Vampire,” which features wickedly bemusing box heads and “Banshee,” about a fictional(?!) locale where couples have their memories wiped clean. Their newest single, “Scream,” features the group’s first short film-length video, set in the glorious ‘80s. Premiering Halloween 2013, “Scream” follows a girl and her friends as they venture into a haunted house to rescue her little brother.

The group is named after Jewel & Blaire’s allure with fantasy folklore. “We were always fascinated by fictional creatures and found it interesting that people have this misconception that pixies are like fairies, but in actual folklore, pixies are evil creatures,” Jewel muses, while Blaire adds, “In our own way, Pixikill is like fighting evil; it's the superhero in us.”

Long before they were killing pixies, Jewel and Blaire were country firecrackers growing up in a haunted old Stagecoach Inn outside of Pittsburgh. They both were cast in the national touring company of “Annie,” where they learned what really matters when on the road for eight months solid: a suitcase full of Barbies. Broadway followed, with both appearing in “Annie Get Your Gun” and “A Christmas Carol” in New York, and making appearances in kid roles on “Saturday Night Live.”

After four years in NYC, they began their current musical triptych in Los Angeles. Coming up: A deeper look into Pixikill's world.

Mr tom said…
Welcome look forward to hearing your music, please check us out like it on face book if you do